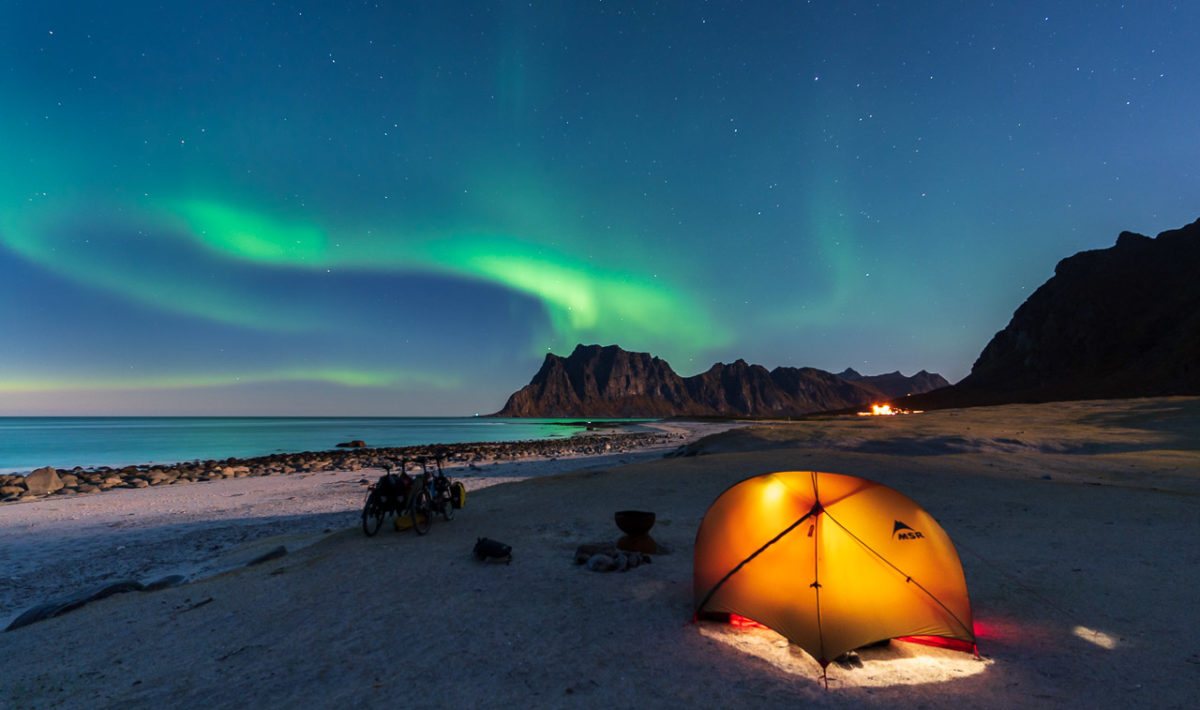 It’s already dark when we reach the Lofoten archipelago in Moskenes at 7:30pm. We quickly disembark the ferry and get back on our bicycles, but only for 5km, just the time to find a good spot for the tent, right before the famous fishing village of Reine. To maximize our chances to see northern lights, we make sure we have a clear view towards north from the camp. Tonight the sky is clear, and the forecast predicts strong activity. As soon as it’s pitch black, the show begins. And what a show! The auroras are now bright, green, and all over our heads, for hours. What a great introduction to the Lofoten islands!

After a short and cold night, we wake up at 5:30am for a morning hike to Reinebringen. The trail head is only 200m from our camp, so we just keep the tent up in the meantime. The 448m ascent has become incredibly easy since a staircase was completed last year: we reach the top in less than an hour and manage to catch the sunrise. This is probably the most popular hike in the Lofoten islands, but for a good reason. The view towards the village of Reine, its islands connected by bridges, its surrounding fjords and mountains is simply stunning. We spend almost two hours up there, then get back to our camp. We take our time before packing since we have less than 10km to ride today. After packing, we visit the village of Reine and take a lunch and coffee break at the Circle K. We are surprised to see so many tourists despite the coronavirus and the low season. Campervans are everywhere in the Lofoten. We then head towards our accommodation on Hamnøy, which is the last island of the village of Reine. We booked a renovated “rorbu” (fisherman’s house) where we’ll spend three nights, for our first break since Offersøy cabin. After dinner, we are lucky to see another great northern light shows, almost just as great as yesterday’s.

We start our Monday with some grocery shopping as shops were closed on Sunday, then enjoy a great breakfast at the rorbu. We have muscle pain from the small hike yesterday, which is quite funny after all those kilometres cycling. It seems we’re only able to ride now and not walk anymore. The temperature increased from less than 5°C yesterday morning to around 12°C, and is expected to remain quite mild for the next ten days at least. Mélanie and Jonathan arrive a bit later and will stay with us for the next two nights. In the afternoon, the sky gets really clouded. Nevertheless, we cycle to the southernmost village of the Lofoten archipelago: Å. This is also where the E10 roads starts. We finish the day with a great dinner at the rorbu with Mélanie and Jonathan, and they tell us everything about their journey since Offersøy. We also see more northern lights.

On Tuesday, the sky is still pretty clouded and except a small hike to Olenilsøya kystfort, we mainly spend it resting.

On Wednesday the 30th of September, we are sad to leave our comfortable accommodation but at the same time excited to continue our journey in Lofoten, where we plan many detours. Under a completely clouded sky, we leave our bicycles in Fredvang for a hike to the top of Ryten (543m) which offers a great view on Kvalvika Beach. Back on the main E10 road, we pitch the tent a few kilometres further, just before the village of Ramberg. Outside of the hike, we only cycled 28km today.

The sun is back on Thursday the 1st of October, and we pass by Ramberg and Skagsanden beaches. From nearby Flakstad, we take another (small) return trip to the fishing village of Nusfjord. Under bright sunshine, the autumn colors are at their best. Back on the main road, we leave the island of Flakstadøya through a 1,7km tunnel under the Nappstraumen strait, and reach the island of Vestvågøya. With a slope of 8%, heavy traffic and some water at the bottom, this tunnel is quite horrible. Johanna realizes she forgot her helmet on the other side but definitely doesn’t feel like going back. We take a sunny break at Skreda rest area. We then leave the E10 towards the beaches of Vik, Haukland and finally Uttakleiv where we’ll spend the night after a 53km step. Uttakleiv beach has some facilities for campers such as tables, water and toilets. Many groups just come for a few hours around a campfire. Armand goes for a quick swim in the cold sea, and after a great sunset, auroras start to lighten the sky before the dusk is even over.

In the morning, we meet Mélanie and Jonathan that were behind us, hence were able to pick up Johanna’s helmet and give it back to her. They go for a hike, but we decide to keep riding instead. We go inland on Vestvågøya by following the E10 rather than following the coastal road south of the island, mainly because two wooden bird observation towers have an architectural interest for Johanna. The first one is next to the lake Skjærpvatnet and the second one next to Gårdsvatnet. We then cross the Sundklakkstraumen and Gimsøystraumen bridges to reach the Austvågøy island. We leave the E10 once more for a return trip to the fishing village of Henningsvær, often called the “Venice of Lofoten”. We are surprised to see a lot more tourists and restaurants here than in Reine for example. While the village itself is nice, the aerial view from the football stadium is simply stunning, and we are happy to be able to capture it with our drone. It’s already quite late in the day when we leave, so we find a charming wild camping spot a few kilometres before the village. We are lucky to cook with a view and another great sunset. Then after dark, we witness another spectacular show of northern lights.

When we wake up on Saturday, the sky is still clear but much more hazy. Back on the E10, we cycle to Svolvær, the capital of Lofoten with a population of less than 5000 inhabitants. In Svolvær, we do some grocery shopping for the weekend and have a coffee at the Circle K. After another 15km, we take a long break at Austnesfjorden rest area to remotely attend Armand’s sister’s wedding through video-conferencing. The weather is so good that we don’t even wear a jacket. We leave the E10 once more to take a detour on Fylkesvei 888. This adds more than 30km to the itinerary, but it’s a relief to be on a such a low-traffic road compared to the crazy amount of campervans on the E10. After at 67km daily step, we stop at Grunnfør to sleep in a terrific wooden bicycle shelter that has an upper level with a 360° glass façade. Unfortunately, there is a big car park loved by campervans next to it so this charming seaside spot cannot exactly be described as “quiet” at all, but at least we have the shelter just for us.

On Sunday morning, we impulsively decide to leave the Lofoten islands by taking the ferry from Fiskebøl to Melbu, which is our entry point to the Vesterålen archipelago. This will save us almost 20km of tunnels on the “Lofast” itinerary, but we quickly realize that the scenery here is not as impressive as in the Lofoten. We are actually surprised to see many towns separated by farmland and quite a lot of traffic. However, the distant view of the skyline of the Lofoten islands across the Hadselfjorden is still very much worth it, especially under bright sunshine as today. We pass by the towns of Melbu, Stokmarknes and Sortland, and pitch the tent right before sunset, next to a fishermen shelter along the lake Kjerringnesdalsvatnet. With a sunset at 6:07pm, the days are getting shorter and shorter very quickly. Our daily step was 84km, including the 8km ferry crossing.

Monday the 5th of October is our last day before the next break that we’ll take in Harstad. The weather is still very good but we notice that the birch trees start losing their leaves. Is autumn over already? We ride the 65km to Harstad (which includes a 6km ferry crossing from Flesnes to Revsnes), do some grocery shopping, then reach our Airbnb around 3pm. With 11 000 inhabitants, Harstad is significantly larger than any other town we passed by since Bodø. We are going to spend three nights here, because the express boat to Senja island only runs every alternate day.

Looking backwards, we realize how blessed we were that the weather finally improved after 24 days of rain, especially in such a fantastic landscape as the Lofoten. That in addition to the strong aurora activity made it a perfect week.

5 Replies to “Indian summer in Lofoten”